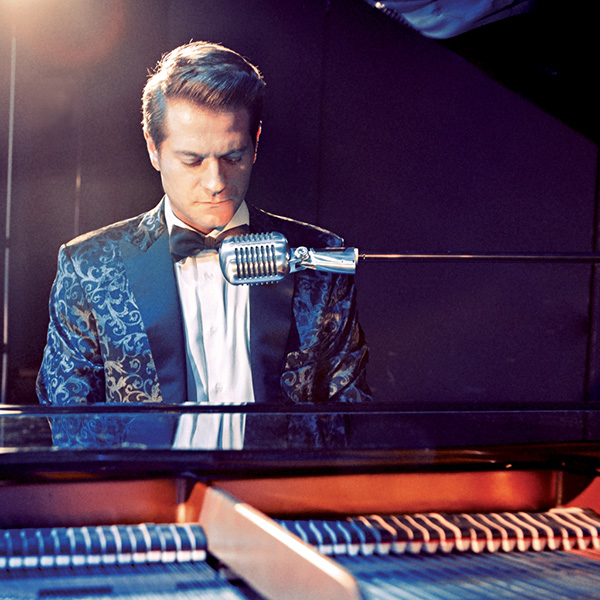 Stefano Signoroni, singer, composer, musician and entertainer, studied classical singing and piano first, then modern singing and jazz. After his debut on television in 1999 to the program “La Canzone del Secolo”, by Pippo Baudo, he is singer and frontman of the Back in Blues Band, from 2001 to 2005, and realizes the album Back on The Good Foot-live (Kayman Records ).

After other performances on TV (as a singer and pianist at Grande Hotel Casino and Comedy Club, between 2006 and 2006), he follows Eros Ramazzotti on World Tour, performing as a chorister and keyboard player, from Siberia to Australia, passing through the Romanian Sibiu (European Capital of Culture 2007).

Stefano Signoroni then spent a couple of years on the radio, as a conductor, together with Niccolò Agliardi, of Le Parole dell’’ate, on Radio Blu, in 2009, and collaborated with the actor Ugo Conti in musical and theatrical performances. In 2010 he participated in the recording project of Giorgio Onorato Aquilani “The Party of the Century”, on the occasion of which he duets with Bobby Kimbal (Toto) and again Steve Murphy (Alan Parson Project) and Tommy Emmanuel. In the same year, together with Jacopo Sarno and Andrea Torresani, he wrote the song “This is Christmas” present in the soundtrack of Massimo Boldi’s film “A Natale mi marito” (Medusa film).

In 2011 the live and recording project “Stefano Signoroni and the MC” was born, whose first single “Music to watch girls by”, which was then broadcast on R101 and Radio Montecarlo, was very successful, and made Stefano land in the cast of the TV show “Kalispera” by Alfonso Signorini (Canale5).

2012 is for Stefano Signoroni a year of intense live activity in Italy and Europe, while 2013 is dedicated to the continuation of the recording project. The single of the summer 2013 “Help yourself” goes into rotation in more than 100 radios and is chosen as the theme song for the Radio Monte Carlo program “Alfonso Signorini Show” for the 2014 edition. Also in 2014 the single “When I tell you that I love you “English version of Tony Renis’ famous song” When I say I love you “and the Christmas single” Calypso Navidad “in collaboration with Jacopo Sarno and the Spanish actor Sergio Muniz. In 2015 it was the turn of “Love is the way” song made with Claudio Guidetti and Kathleen Hagen. In 2016, “GOOD TIMES” was released, a 13-track album featuring great classics and unreleased tracks.

Stefano Signoroni combines his artistic activity with a scientific career in the oncological genetic field. He has two degrees in Medical and Pharmaceutical Biotechnology and lends consultancy at the Hereditary Cancer Unit of the IRCCS National Cancer Institute Foundation in Milan. He is the author of several scientific publications in important sector journals.