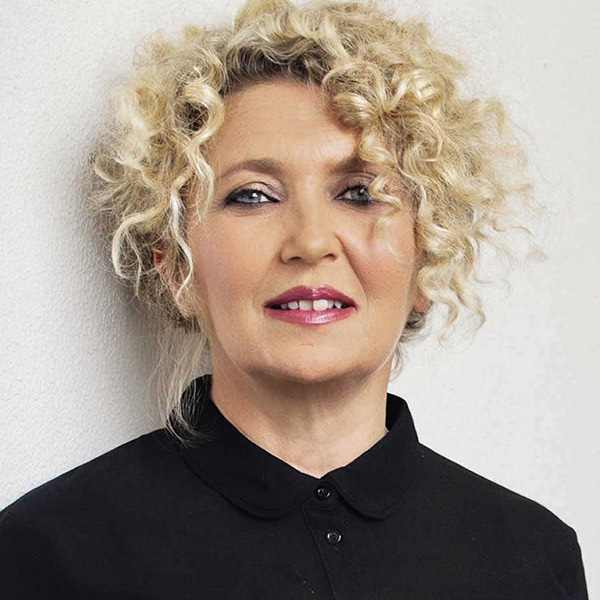 Rossana Casale was born in 1959 in New York to an American dad and a Venetian mom. Shortly thereafter he moved to Venice and then to Milan. Since 1996 he has lived in Rome. In 1972 she began collaborating as a chorister with the Albero Motore group and created a choir herself made up of American girls and boys. Two years later he entered the G. Verdi Conservatory in Milan attending singing, percussion and electronic music classes.

In recent years he has participated in the albums of artists in the history of our music, including Mina, Roberto Vecchioni, Riccardo Cocciante, Ornella Vanoni, Edoardo Bennato, Vasco Rossi, Zucchero, Mia Martini, Loredana Berté, Alberto Fortis and many others. In 1982 she released her first single “Didin” signed by herself and Alberto Fortis. With Fortis a young and deep relationship is created between music and feeling. The relationship will last three years.

In 1984, produced by PFM, his first LP “Rossana Casale” was released, with which he won the “Vela d’argento” in Riva del Garda. Later Rossana starred in Pupi Avati’s film ‘Una gita scolastica’, for the soundtrack composed by Riz Ortolani, of whom she sings ‘A tu per tu’ and ‘L’Incanto’

In 1986 she participated in Sanremo in the ‘Big’ category with ‘Chills’ written and produced by M. Fabrizio. In December he won “Premiatissima 86” with the song “New Life”.

A year later the album ‘La Via dei Misteri’ signed by M. Fabrizio and G. Morra, produced by Fabrizio himself, was released in Sanremo with the song ‘Destino’.

Also in the same year he was a guest of Umbria Jazz in Perugia, where he obtained his first recognition as a jazz singer.

In 1989 again in Sanremo with ‘A cosa servono gli dei’. At the same time, the “Incoherent Jazz” album by G. Morra and M. Fabrizio is released.

In 1991 he took part in Sanremo with the song ‘Terra’ and released the album ‘Lo stato naturale’, where he merged his jazz influences with ethnic sounds. She brings together jazz musicians and the Toure Kounda group, thus starting a research process in music and in the lyrics that are increasingly signed by her. She signed the album ‘Alba Argentina’ in 1993 together with Grazia Di Michele and with the same won third place in Sanremo with the song ‘The different loves’. The album is produced by Lucio Fabbri.

In 1994 the first totally jazz work: the album ‘Jazz in me’ was released, recorded in four days live with his quartet formed by Riccardo Zegna, Luciano Milanese, Luigi Bonafede (pianist but for her drummer, Carlo Atti and other guests Immediately afterwards Rossana announces her first official jazz tour which will touch the biggest local Jazz festivals and will give her credibility and value in an environment that is not easy to break through.

In 1995 in Loreto she sang an unpublished ‘Ave Maria’ written by Vincenzo Zitello for Pope Giovanni Paolo II in front of an audience of 400,000 young people.

In the 1995/96 theater season, she started in February with the musical ‘An American in Paris’ paired with the etoile of the Raffaele Paganini Opera House, obtaining a huge success with audiences and critics and filling the halls of over 140 Italian theaters. For this musical Rossana wins the “Bob Fosse” prize as revelation in the Musical.

In 1996 Rossana presented her seventh album ‘Nella notte un volo’, produced and written by her and Andrea Zuppini. A tour of 50 concerts in the Italian Jazz Clubs follows.

In 1997 he is the lead voice interpreter of an unpublished lead signed by M. Fabrizio ‘Per le terre assai lontane’ directed by M. Donato Renzetti, performed on tour with the orchestras of the most prestigious stable theaters in Italy including the Teatro Massimo of Palermo.

In 1998 Sebastiano was born, the son of Maurizio Fiorini, a young entrepreneur from the Marche whom Rossana met on tour. Rossana, Maurizio and Sebastiano live between Rome and Ancona.

Referring to the previous ‘Jazz in me’, ‘Jacques Brel in me’ was released in 1999, immediately followed by a tour. With her: Luciano Milanese, Luigi Bonafede, Enzo Zirilli, Claudio Capurro.

In the 1999/2000 season he played the role of Zucchero alongside Alessandro Gassman and Gianmarco Tognazzi in the musical “A qualcuno piace caldo” produced by the Compagnia della Rancia under the direction of Saverio Marconi. The musical achieved amazing success and broke all the box office records.

The year 2000 sees the publication of ‘Strani Frutti’, dedicated to the “cursed” interpreters of the 1900s.

In the 2001/2002 season she played Audrey in ‘La Piccola Bottega Degli Orrori’, in partnership with Manuel Frattini and Carlo Reali, also for the Compagnia Della Rancia, directed by Saverio Marconi. During this tour, Rossana receives the tragic phone call announcing the premature death of her partner while traveling to Cuba with a friend. Rossana leaves the theater and goes to live permanently in Rome with her son.

In the same year she participated in the television musical program Operation Triumph as director of the school, together with Miguel Bosè who is the presenter of the program.

‘Riflessi’ is released, an album of songs from Rossana’s musical past, rearranged with great particularity by the jazz double bass player Aldo Mella.

In 2004 Azzurra Music published ‘Billie Holiday in me’ where Rossana interprets some of Billie Holiday’s masterpieces, in an atmosphere of rare value. It is accompanied on the piano by Luigi Bonafede.

This album is immediately followed by a tour of over 250 concerts throughout Italy. On stage with her the same Luigi Bonafede, Aldo Mella, Francesco Sotgiu and Roberto Regis.

In the spring of 2005, Rossana returned to the theater as “Narrator” of the musical written by Andrew Lloyd Webber, “Joseph e la strabiliante tunica dei sogni in Technicolor” in partnership with Antonello Angiolillo. Directed by Claudio Insegno, Rock Opera production.

In July 2006 she was a guest of the third edition of the Giorgio Gaber Song Theater Festival where he opened the festival by interpreting the song ‘If there was a man’ by Gaber and Sandro Luporini and ‘When I will be able to love’. From that moment on an important link with the Gaber Foundation.

In 2007 her new CD was released, written by her in six months and inspired by Sara Cerri’s book entitled “Circo Immaginario”. The album is masterfully arranged by Andrea Zuppini. It follows a tour in the most prestigious Italian theaters.The show, in line with the theater-song, gets the patronage of the Gaber Foundation and is declaredly dedicated to the heart of Fellini and his inseparable musician Nino Rota. Casale signs its direction.

In November 2008 he presented ‘Milano Per Giorgio Gaber’ at the Piccolo Teatro in Milan.

In 2009 she was Claire in ‘Fiori di acciaio’ directed by Claudio Insegno, with Sandra Milo and Caterina Costantini.

In December 2009, ‘Merry Christmas In Jazz’ is released and produced by her. Tour and CD.

In 2010 Rossana is a teacher at the G.F. Ghedini di Cuneo for the popular music three-year course in the singing class.

In August 2010 – Rossana plays the role of Stefania Ravi in ​​the unreleased musical ‘Svegliati e sogna’ which also composes the soundtrack. Gianluca Ferrato is also on stage with her. The direction is by Marco Mattolini. Text by M. Mattolini, F. Magali, G. Alchieri, P. G. Paterlini.

In the autumn of 2010 he participated as a Vocal Coach in the ‘X Factor’ television broadcast conducted by Francesco Facchinetti and produced by Magnolia alongside Mara Maionchi, a well-known music producer.

In 2011, on the occasion of the presentation of some fine wines by the Director of the Teatro Eliseo in Rome, Dr. Monaci, Rossana presented to the public “The wine concert”, a concert with readings dedicated to “man’s best friend”.
On stage with her the actor Massimo Di Michele, the musicians: Emiliano Begni, Ermanno Dodaro and Francesco Consaga. Tour follows but no CD.

Between 2011 and 2013 Rossana is vocal coach for important musicals such as ‘Romeo and Juliet’ (reg. Claudio Insegno) and ‘Viva Zorro!’ Directed by Fabrizio Angelini, with Michel Altieri and Alberta Izzo.

Since 2012 he has been Professor for the A. Boito Conservatory of Parma for the classes of Popular Singing and Stage Awareness.

In these same years Rossana teaches in the School of Various Arts for the disabled in the Arte Nel Cuore and in June 2013 she signs the direction of ‘Tata Mary’ for the same school with her adaptation of script and musical texts by Girolamo Alchieri.

In July, on the occasion of the tenth year of the Gaber Festival, in Viareggio she presents his new tour ‘Mister G and love’. The work is dedicated to Giorgio Gaber and Sandro Luporini and their vision of the couple and love. In the same year, the album Artist First was released.

In October he is again Vocal Coach at X Factor but this time for the world-renowned artist Mika (Fremantle Media and broadcast on Sky channels).

From February 2014 the tour dedicated to Gaber reopens. On stage with her Emiliano Begni, Ermanno Dodaro and Francesco Consaga.

At the end of November, “Round Christmas” is released, distributed by Egea, a concept album on stories related to Christmas or faith, told by the great authors and interpreters of the 1900s. Tour follows.